a short history by Cooper Gyles

During my crazy youth (well lets admit to my being 26 years old – and now you’ll be able to calculate that I’m either senile or incontinent or both) I was introduced to the wonders of hang gliders and real risk taking.

Being a Type A personality I immediately envisioned myself hanging off Paekakariki Hill and shooting up the high flying sea gulls and being a fighter pilot. Without ado I purchased a Seagull 3 glider with a nice looking cord ration. Huhaaa I thought this’ll keep me in the air for hours at a time. Hell, I could fly from Pukerua Bay to Manawatu Gorge no sweat. That’s what the sales guy told me, so he must be right. Oh yeh!! Lets go then. 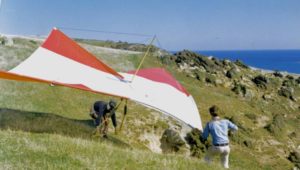 We can all recall back to the 1970’s when anything new was possible but in reality bloody difficult to carry out in reality. Remember British cars that were dangerous at any speed, well hang gliders were no different as I was to find out to my surprise.

I well remember Macalister Park and Ngaio rugby parks were stage one in the realisation that flying a brick was, well I thought, impossible and secondly f*#^*#g dangerous.

Three A frames smashed and one badly bent main strut and hey I was ready. Still I was nervous. Shit, … imagine this thing falling apart 400 ft above the train tracks. Hey straighten up. I’m a tough guy so nothing’s going to stop this lad. But Christ, I am nervous. 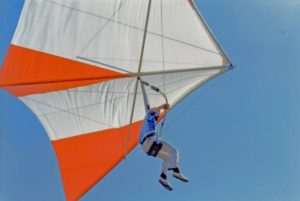 Well it just happened that a small group of us were given access the Baring Head, so off we went one day for a look see. A beautiful norwester 12 to 15 knots and fantastic long gentle slopes just up behind the lighthouse. Thick golden grass two feet thick was just the story for three newbies with no experience. One of our group was another young crazy. His name was Rick Fogel if I recall. [Editor’s note: Rick was a key person in the development of the sport in the Wellington area. He died in a hang gliding accident in August 1976. The Wellington HGP Club awards in his memory the annual “Rick Fogel Trophy” for the member that has best provided the ideals of the sport of hang gliding and paragliding.]

Next weekend we were at Baring Head at 9.00am ready to launch, and yes the weather was just like last weekend. Perfect. 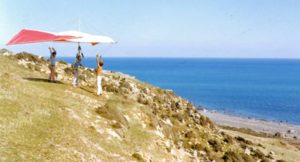 Rigged the beast up and lugged it up the hill behind the special 2 stroke three wheeler I brought for the purpose. No humping for me, well not with a hang glider that is.

Well this was the starting line for me…. a gentle 10-degree slope with a flat flair out landing down near the road. One push off and man I was soaring. Being a very warm day with heaps of moisture creating a dense humid ground effect this was an incredible experience. My first real flight was no more that five feet (70s word for altitude) off the deck and maybe 25 miles per hour. Bloody thing wouldn’t settle on the ground but I was flying and it was such a buzz. And so easy. So up we went again and again …same story every time.

I had absolutely not idea about pitch trim and I was going to learn this very soon by experience during my first “high” solo. 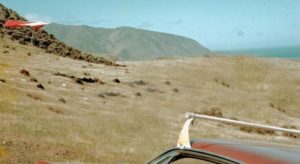 Two or three weekends later was the day for my “solo” flight. Yes, off the edge at Baring Head into the unknown.

Launch time, one supporter on each wing and one at the tail.
I’m peering over this bloody cliff face fearing imminent death, when with 30 seconds to go “5. 4. 3. Stop guys, I’m not quite ready…” Another attempt “5. 4. 3. 2. 1. Stop this feels very difficult right now”. Still another attempt, then suddenly without my knowledge the buggers had catapulted me into space.

“My god I’m flying so where can I land this thing, without breaking my neck?”

But hang on I’m flying backwards and up. This isn’t what I expected. Pull the bar in hard. Right into my stomach, that’ll make the bastard go forward. Still going backwards until I was suspended 30ft above the lip of the cliff with all the experts telling me something different at once. I can’t go forward and I cant go down! So there I hung, just sitting there. Yes I’m shitting myself, how do I get this thing to come down. Am I on a ski lift or what? Well least the views are OK.

“Don’t fly back” came one piece of advice “cause the back draft will dump you head first into the deck”. “Pull the bar in closer” says someone. “Swing it to the outside and fly along the ridge” says another. I cannot possibly do that, I’ve never really flown before except dead straight and 5 feet off the deck. 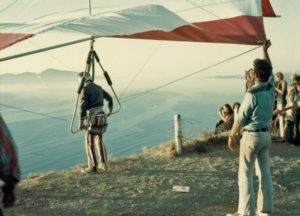 Ten minutes pass and what in shits name am I gonna do? I can’t get down….

Then just as I think of getting someone to throw me up a ski hook, a sudden increase in pressure pushes be back 100 ft and lets me down ever so gently to terra firma. So there I stand looking like a complete dork wondering how in heavens name I managed a top of hill landing.

There it was, on that summers day back in 1974, my first solo was a success by total good fortune.